You are here: Home » poisoning » Admitted To Hospital For CO Poisoning

Most of these news reports are, unfortunately of tragedies that have occured but it must be noted that there are a numerous more instances of CO poisoning that do not result in death and which do not get reported in mainstream media. 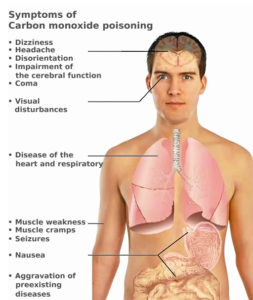 Many sufferers are treated in time and there are a few instances recently that end on a happy note.

A mother and her four-year-old son needed hospital treatment for carbon monoxide poisoning this afternoon.

Firefighters were called to a home off the Crescent, near Marlow Road, in Maidenhead at about 2pm after the carbon monoxide alarm had started sounding and the pair had begun to feel unwell.

A crew from Maidenhead evacuated the property and gave them oxygen, before paramedics arrived with a breath analyser and took them to hospital.

They have apparently both now returned home.

A carbon monoxide monitor was also sent out from Reading, which recorded carbon monoxide levels of between 40 and 80 parts per million in the house. Any level above zero is considered unsafe.

The National Grid was contacted to isolate the gas supply from the house, which was then ventilated.

This mother and son, fortunately, had a lucky escape and are happily back home. The correct procedures have been carried out and with the property safe, they returned home. A carbon monoxide detector will have been installed and this should prevent this family going through such worry again. You can find out more about CO symptoms here.

In the U.S recently there was another report of 3 people being admitted to hospital:

Three people from a residential high-rise downtown were taken to a hospital late Monday night as fire crews determined the building had a carbon monoxide leak.

The 15-story building in the 500 block of North Akard Street had to be evacuated late Monday night after residents smelled an “unknown odor.” Carbon monoxide is odorless, but there may have been other fumes in the building.

The exact location of the leak was not found, but hazardous materials crews believe it had something to do with the heating, ventilation and air conditioning for the building, Dallas Fire-Rescue spokesman Jason Evans said.

Three people suffering from breathing problems were taken to a hospital. The most common symptoms from carbon monoxide poisoning are headache, dizziness, weakness, upset stomach, vomiting, chest pain and confusion.

Read the full article from the source here…

Again, a lucky escape but these, happy outcomes can also, quickly turn to tragic outcomes which is why any kind of
monitor is required in every property that has or is in the viscinity of any fuel burning appliance.