You are here: Home » poisoning » Firefighters And Carbon Monoxide

Carbon monoxide does not just come from faulty fuel burning appliances, it can be generated in a number of different ways and can target various people just there to do their jobs. The following article reviews how firefighters can be exposed to carbon monoxide poisoning, more articles available here.

While looking for an SOP on a large metropolitan fire department’s website, I stumbled across something unrelated that caught my eye. This SOP was from a fire department I highly respect as leaders in safety and employee health.

To my surprise I noticed an SOP allowing for firefighters to remove their SCBA if the carbon monoxide level is less than 50 ppm in the sampling. It is commendable that a fire agency is addressing the exposure of CO and following OSHA’s permissible exposure limit of 50 parts per million over an 8-hour time frame.
Operational SOPs really need to look at the science and at the long-term and chronic exposure issues involving CO.

There has been excellent work done to identify the risk associated with CO from a knock down or acute illness standpoint. Yet some of the finer details are often missed in the attempt to get the message across.

This is due to a lack of surveillance on exposures and patient outcomes by federal agencies. It’s especially true when it comes to firefighters, as only a handful of NIOSH and NIST investigators really understand the fire service’s challenges with exposures to chemicals and suppression activities.

Many of these findings don’t make it into rehab policies. Therefore, the two insidious effects of exposure to carbon monoxide often go unrecognized in the fire service.

The first of these relates to molecular change. Somewhere in EMT training you learned that CO has an affinity for hemoglobin 150 to 200 times higher than oxygen depending on the source.

What escapes a lot of educational programs on this is that when CO binds to hemoglobin, it also changes the geometry of the hemoglobin molecule.

The normal geometry of the hemoglobin molecule carrying oxygen and carbon dioxide is designed to travel swiftly and unobstructed through our blood vessels and capillary beds, even passing around the changes in arteries and veins as they become embedded with plaque.

The geometrical change in hemoglobin caused by carbon monoxide makes it harder to pass swiftly through the blood vessels and lends itself to clumping together, resulting often in a clot or obstruction. And the geometry change tends to make it sticky.

Couple this with someone with underlying heart disease and the other fire gases that can stop cellular activity and trigger low blood pressure, and you have a line of duty death categorized as cardiac when in fact it maybe toxicology related.

There is suspicion the extended time CO stays in the blood stream maybe be a causal factor in day-later deaths.

A second carbon monoxide lurking on the fire scene is known as CO in the radical form. If you have taken a fire chemistry course, one of the principle concepts is the formation of compounds or elements that are called free radicals.

Free radicals are atoms or groups of atoms with an odd (unpaired) number of electrons and can form when oxygen interacts with certain molecules. Fire often provides the environment that uses oxygen to create these free radicals.

Once formed, these highly reactive radicals can start a chain reaction damaging cells, tissue and organs. Free radicals like carbon monoxide like to attack tissue and cells.

A favorite target for the radical CO is the myelin sheath of a nerve cell.

A myelin sheath is like the insulation on a wire; it ensures the electricity or nerve impulse gets to site of where it is used. When a wire’s insulation has a hole in it, the electrical signal is interrupted or delayed, often going somewhere it should not.

The full article can be read here…

Most of us only learn of carbon monoxide when we are exposed to it in our homes but it is often the fire brigade that is a port of call when these situations are triggered. Below, residents had lucky escape thanks to firefighters discovered elevated carbon monoxide levels in these homes.

Carbon-monoxide levels spike; residents ‘lucky’ they were out

Leominster Fire Department Lt. Jay Leblanc measures the airflow around the door of a home on 23 Fairmont St. that was found to have dangerously high levels of carbon monoxide leaking from a broken exhaust pipe on a heating unit. SENTINEL & ENTERPRISE / SCOTT LAPRADE

LEOMINSTER – When firefighters responded to a call of elevated carbonmonoxide levels at a three-family home Wednesday morning, they were relieved to find no one home after detecting extremely high levels of the deadly gas.

“They were lucky,” Deputy Fire Chief Scott Cordio about residents of the triple-decker at 23 Fairmont St. “If anyone was in the home, the situation could have been very dangerous.”

Cordio said the department was alerted to the problem when the homeowners went to check on the unoccupied first-floor unit after hearing the carbon- monoxide detectors going off.

Read the full article on this page
We cannot always rely on the fire service to be there for us or to find carbon monoxide leaks in time. It is on ourselves to look after our households and work places to ensure everyone in our surroundings is safe from CO poisoning and to test our carbon monoxide alarms 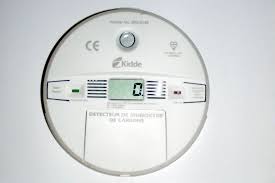