You are here: Home » effects » The Silent Killer

On Tuesday the funeral will be held of a man who died from CO poisoning. This deadly gas can strike at any time causing many health problems and as you can see from the article below, unfortunate deaths.

THE funeral will take place on Tuesday of a man who died from suspected carbon monoxide poisoning at his home in Co Down.

Grandfather-of-two William Stockdale (60) was found dead at his house on the Castlewellan Road in Newcastle on Friday evening.

A post-mortem examination to determine the cause of death has been carried out, but the results are not yet known.

The death comes just over a year since a married couple in their seventies, Francis and Nan O’Reilly, were found dead in their caravan on the Tullybrannigan Road in Newcastle.

Mr Stockdale, who came from a farming background, was a long-term resident of Newcastle.

Four ambulance crews attended the scene on Friday night, with three other people in the property and two paramedics also treated in the Ulster Hospital for carbon monoxide poisoning. They were later discharged.

It is understood Mr Stockdale had been recovering at home after having stents inserted in his heart, and had initially believed the chest pain and discomfort he was experiencing was due to the operation.

John McPoland, from the Ambulance Service, described the actions of paramedics at Mr Stockdale’s home as “unbelievable”.

He said: “They undoubtedly saved the lives of themselves and three other people. More remarkable than all that, after they were discharged from hospital they reported back to the station to fulfil the rest of their duties.”

Read more of this news article from the original publication. 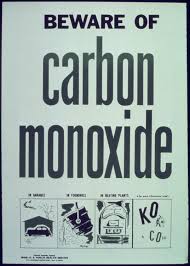 These reports are a regular occurance throughout this country with many more around the world. Carbon monoxide needs to be understood be everyone, so let us learn more about this silent killer.

Carbon monoxide is an odorless, tasteless, colorless gas with nearly the same molar mass as air (CO is 3% lighter on average). This means that CO doesn’t rise or fall, but disperses evenly into the air of an enclosed space. That’s why detectors can be placed low on a wall at an outlet, or high up on a ceiling. The gas is toxic to humans at concentrations above 35 Parts Per Millions (PPM). Because of this, carbon monoxide has been dubbed the silent killer. We’ve all heard not to use a kitchen stove as a heating appliance, or not to run a generator inside the house. The reason is carbon monoxide.

The American Center for Disease Control has stated that unintentional carbon monoxide poisoning accounts for over 20,000 emergency room visits each year, including over 400 deaths. Carbon monoxide poisoning starts with a headache. It progresses to dizziness, nausea, and general flu-like symptoms. Most people think they’re just coming down with the flu, and head to bed. This is often a fatal mistake.
Biology
Carboxyhemoglobin molecule, by Rifleman 82 via Wikipedia
Carboxyhemoglobin molecule, by Rifleman 82 via Wikipedia

Carbon monoxide can always be found in small amounts in the human body. The molecule is known to have some therapeutic anti-inflammatory effects in humans. At higher concentrations though, CO becomes incredibly toxic. The most frightening part about carbon monoxide poisoning is the method in which it operates. Hemoglobin is the molecule in red blood cells which carries oxygen. Hemoglobin loads up with oxygen in the lungs, becoming oxyhemoglobin. The circulatory system then carries this oxyhemoglobin throughout the body, where it delivers its payload to muscles and organs. Carbon monoxide also bonds to hemoglobin, creating carboxyhemoglobin. In fact, the bond is over 200 times stronger than oxygen. This means carboxyhemoglobin doesn’t separate so easily. The carboxyhemoglobin essentially becomes an inert molecule riding through the circulatory system, starving the organs of oxygen.

This is where things get nasty.

Everyone knows that the treatment for carbon monoxide poisoning is to get to fresh air. However, it won’t immediately remove carboxyhemoglobin from the blood. That takes time. Carboxyhemoglobin has a half-life of 4 to 6 hours. There is a way to speed things up though. Administering pure oxygen to a victim can reduce the half-life down to less than an hour.

In extreme cases, hyperbaric oxygen treatments are used. The victim is placed into a pure oxygen chamber pressurized to three atmospheres. This forces oxygen to diffuse into the blood plasma, where it is carried to starved tissues.
neuron
Structure of a neuron, by Quasar Jarosz via Wikipedia

For acute poisoning patients, surviving the initial episode doesn’t mean the worst is over. Many patients begin to make a recovery, but between 2 and 40 days later, things change. The patients rapidly show signs of further brain damage. Balance, memory, and cognitive functions all affected. This phenomenon is called delayed neuropsychologic sequelae, and it was devastating for Molly Weber. The mechanism of neuropsychologic sequelae is still not completely understood. Research has shown that carbon monoxide damages Myelin Basic Protein (MBP), the material which surrounds nerve cells. The damaged MBP triggers the body’s immune system. White blood cells called leukocytes attack and remove the damaged MBP. The leukocytes don’t stop there though. They begin to attack healthy MBP, destroying healthy brain tissue. The result of this biological one-two punch leaves permanent brain injuries that can take years to recover – if recovery is possible at all.

In researching this article I was reminded how little we know about the brain, how it can be injured and how it recovers from those injuries. If there is one place where bio-hackers can really make a huge difference, it’s in studying and trying to understand how all this works.
Environment

The chief way CO is created is through incomplete combustion of carbon-based fuels. If there isn’t enough oxygen present to oxidize a fuel to CO2, CO is the result. Internal combustion engines produce huge amounts of carbon monoxide. A properly tuned gasoline engine can produce as much as 30,000 ppm CO. In the United States, gasoline and diesel vehicles produced after 1975 have catalytic converters which greatly reduce CO emissions. However, not all vehicles are well maintained. Every year deaths are reported from people sitting in idling cars with faulty exhaust systems.

Small engines such as generators and power washers don’t tend to have catalytic converters, yet they still produce large amounts of carbon monoxide. Generators running inside homes kill families every year. Even running a power washer in a semi-enclosed space such as a parking garage is enough for the gas to build up to dangerous levels.

In the home, most carbon monoxide poisoning events happen due to problems with gas-fired appliances. A properly tuned water heater, boiler, or furnace will create some CO. If the air band isn’t correctly adjusted, CO levels rise. If the exhaust becomes blocked or compromised, the CO will find its way into the living spaces. Just in the last week, a home in Oklahoma filled with CO when roofers blocked the water heater exhaust stack. Thankfully, the family had a carbon monoxide detector in their home, and nobody was injured.

Read more from the original source
Carbon monoxide injuries and deaths can be avoided with a carbon monoxide alarm fitted into the home or work areas. They will alert before the gas levels become too dangerous and while deaths and injuries continue to occur, we must all continue to spread the word about what it can do. Knowledge is the key and with knowledge, everyone is more likely to get some kind of alerting device. You can learn more about carbon monoxide here.